GE IS200ISBDG1A Innovation Series Bus Delay Module. The Functional Acronym (Abbreviation) used in GE Documentation for this board is ISBD.

Sell Surplus: Have a IS200ISBDG1A to sell? Sell Now 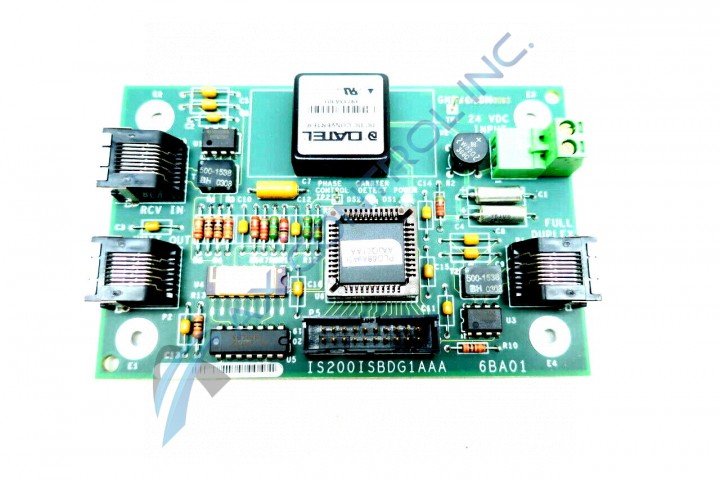 GE IS200ISBDG1A Innovation Series Bus Delay Module. The Functional Acronym (Abbreviation) used in GE Documentation for this board is ISBD.

Sell Surplus: Have a IS200ISBDG1A to sell? Sell Now

The IS200ISBDG1A is a board component for the Mark VI system.  The Mark VI was one of the last Speedtronic gas/steam turbine management systems created and released by General Electric.  Speedtronic systems were used for heavy-duty turbine management from the 1960s (in the form of the Mark I system) on through to the 2000s.   The Mark VI built upon the strengths of previous systems, like triple redundant backups used in the Mark IV and Mark V systems, and improved upon them using new technology, such as Ethernet communications and a PC-based Operator interface.

The IS200ISBDG1A is built with several integrated circuits.  It has one DATEL dc/dc converter component. The board has TP test points, two light emitting diodes, and two small transformers.  The LEDs are labeled as ‘carrier detect’ and ‘power.’ The board has resistors primarily made of metal film and capacitors of electrolytic material and of ceramic material.

The board is marked with its ID number, with the code ‘6BA01’ and with reference designators to identify components.

Our highly skilled technicians can repair your IS200ISBDG1A. All of our repairs come with a 3 Year AX Control Warranty. Please contact us for additional information about our repair process. To receive the repair pricing and lead time listed above please process your repair order via our website. The following repair options may be available upon request: