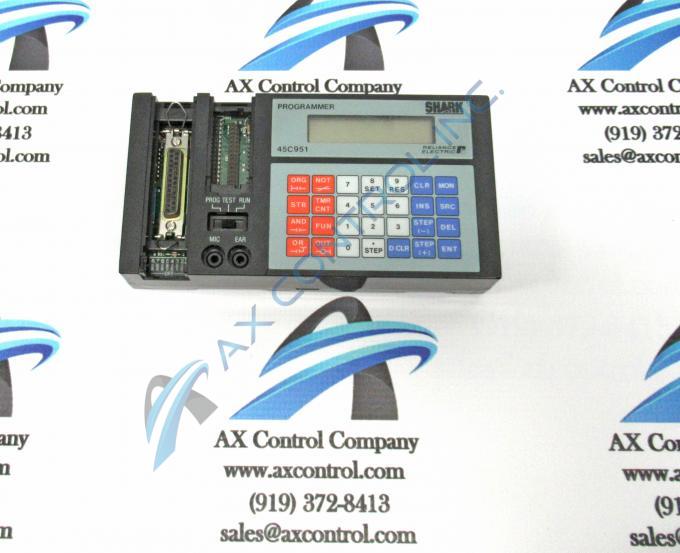 The 45C951 device is a universal programmer that was made to be included within the Shark XL product family, which was created by Reliance Electric. The 45C951 universal programmer is not being produced by the original manufacturer anymore; however, AX Control may still have it in stock currently. You can check by looking on our website or by calling or emailing us.

The 45C951 universal programmer is equipped with the ability to let application programs be inputted into the processor module’s memory, printed out on a printer that is connected to the RS-232C connector, and stored onto a cassette tape that is connected via the cassette tape recorder terminals. The 45C951 universal programmer is also equipped with an EPROM burner.

On the 45C951 universal programmer’s faceplate, you will find many different components. At the top right, there is the LCD display with the keypad below it. They keypad has operation keys, numeric keys, and command keys. To the left, there are the cassette tape recorder terminals. These terminals are labeled with “MIC” and “EAR.” Above these terminals, there is the mode selector switch which has three positions: programming, test, and run. Finally, there are two different connectors at the top of the 45C951 universal programmer: the RS-232C connector and memory pack connector.

To install the 45C951 universal programmer, connect it with the faceplate connector on the processor using a sixteen pin ribbon cable. You can also use an optional mounting bracket or expansion cable with this device.

The 45C951 is a universal programmer. The 45C951 has an EPROM burner and the 45C951 allows application programs to be entered into processor memory, stored on a cassette, and printed on a printer attached to an RS-232 connector.

What modes can you put the selector switch on the Reliance 45C951 in?

The selector switch on a 45C951 can be placed into: programming mode, test mode, or run mode.

Our highly skilled technicians can repair your 45C951. All of our repairs come with a 3 Year AX Control Warranty. Please contact us for additional information about our repair process. To receive the repair pricing and lead time listed above please process your repair order via our website. The following repair options may be available upon request: