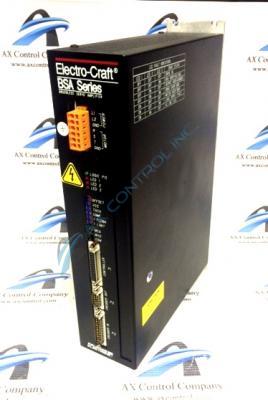 The 9106-0081 is a 15 Amp Electro-Craft Servo Amplifier made by Reliance Electric for their BSA series. This servo amplifier may have also been mass-produced and sold by ABB and/or Baldor Reliance depending on what years it was actually in production. The alternate part number for this device is BSA-15.

The LED indicators on the 9106-0081 have the ability to detect the following faults. LEDs 1, 2, and 3 will glow in different patterns to alter the user to different faults.  These faults include Bus over-voltage, output over-current, drive over-temp, motor over-temp, logic supply fault, and AC line loss. When none of these LEDs are glowing, it indicates that the drive is okay. This module also has three RS-232 connections. One is a female connection while two are male. The two male connections are for the encoder while the female is for the controller. There is also a terminal strip on the top of the faceplate. It has 6 total terminals.

The 9106-0081 is a high performance brushless drive that can be used to control and power Reliance motors. The BSA Series is similar to the BRU-200/500 Series but smaller drives.

Yes, AX Control can repair your 9106-0081 if it is not functioning correctly. Our technicians are trained to complete board level repairs.

Our highly skilled technicians can repair your 9106-0081. All of our repairs come with a 3 Year AX Control Warranty. Please contact us for additional information about our repair process. To receive the repair pricing and lead time listed above please process your repair order via our website. The following repair options may be available upon request: