Sell Surplus: Have a IS200SPROH1A to sell? Sell Now 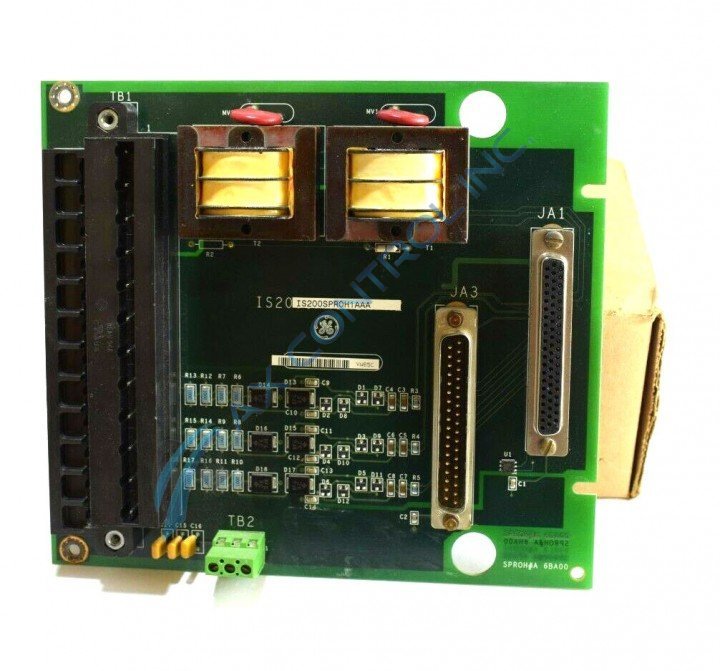 Sell Surplus: Have a IS200SPROH1A to sell? Sell Now

The IS200SPROH1A manufactured by General Electric or GE is a device which is known as a PPRO terminal board. This device is a component in General Electric’s Mark VI series. The Mark VI, like the other series in the Mark family, was designed to meet all of the needs of industrial turbine management. These systems have been in use for several decades in a variety of different industries.

The IS200SPROH1A is a square printed circuit card or printed circuit board (PCB). The entirety of the left edge of the IS200SPROH1A is occupied by a large solid black terminal block. To the right of this terminal block, along the upper edge of the IS200SPROH1A, two transformers have been paired together in a horizontal row. The majority of these transformers are red and they have yellow and black pieces on the top. Directly below these transformers are two (2) spaces which may contain small resistors. These resistors are yellow with a single black band in the center. A collection of six (6) rectangular black diodes have been arranged into two (2) vertical rows of three (3) diodes each for a total of six (6). Three (3) solid yellow capacitors which are small in size are placed beneath these diodes in a horizontal line. Several silver capacitors which are even smaller than the yellow ones have been attached to the PCB to the right near the center of the IS200SPROH1A. This Mark VI PCB also contains two (2) connector ports on its right half as well as a green terminal block on the left.

Our highly skilled technicians can repair your IS200SPROH1A. All of our repairs come with a 3 Year AX Control Warranty. Please contact us for additional information about our repair process. To receive the repair pricing and lead time listed above please process your repair order via our website. The following repair options may be available upon request: