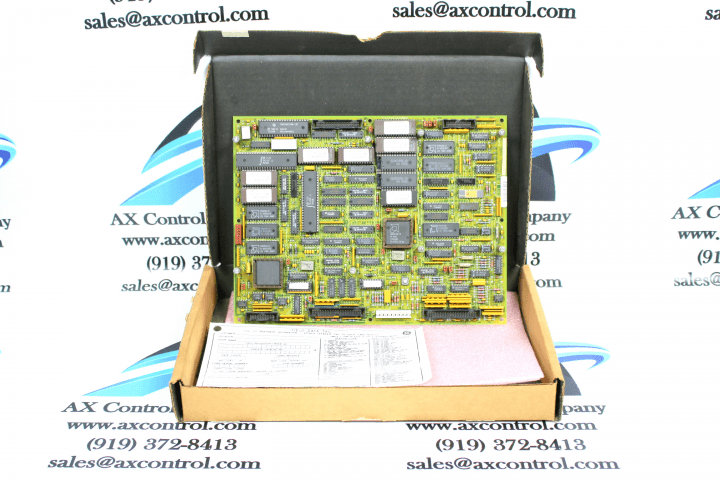 The 531X301DCCAWM1 is a board component manufactured by GE as a replacement part for several of its general purpose drives.  This may include the DC300 or the AC300. The board is currently out of production and generally considered obsolete.

The 531X301DCCAWM1 functions as a Drive Control Card.  There are multiple versions of this board within the 531x series; please verify which board best fits your system’s requirements.  The 531X301DCCAWM1 is marked with several manufacturing codes including its board number and its alternate F31x board number. Most components are marked with a reference designator.  Integrated circuits tend to have the manufacturer part number printed on their top surface.

The 531X301DCCAWM1 has a single LED indicator. This component has multiple lights on its surface. It is located near one board corner.  The board has over thirty resistor network arrays and several potentiometers. It also uses resistors typically made from metal film. The board has capacitors made from a number of materials including ceramic, aluminum electrolytic, and polyester vinyl.

Other components on the board surface include board connection components like five cable connectors and two header connectors.  The board has multiple jumper switches, a push button component, TP test points, and over seventy-five integrated circuits. These include field programmable gate arrays, analog bus drivers, oscillating chips,  and logic ICs. The board has eight standoffs installed to allow two auxiliary boards to be added to the 531X301DCCAWM1. More information regarding the board’s operation may be found through publications like manuals, user guides or data sheets originally provided by GE.

Our highly skilled technicians can repair your 531X301DCCAWM1. All of our repairs come with a 3 Year AX Control Warranty. Please contact us for additional information about our repair process. To receive the repair pricing and lead time listed above please process your repair order via our website. The following repair options may be available upon request: