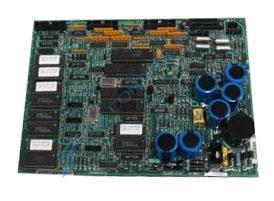 The 531X210DMCACM1 is a PCB board component from General Electric for use within several systems, including the AC or DC 300 drives.  While these drives are now typically considered obsolete, they were originally considered flexible and dynamic systems for use in industrial settings.   The board is marked on two edges to allow for alignment and is drilled in each corner.

The 531X210DMCACM1 is populated with diodes, capacitors, and resistors.  Capacitors are made from various materials, including ceramic, polyester vinyl, and other materials.  The board has six large aluminum electrolytic capacitors. Resistors on the board are both metal film and carbon composite.

More information on the 531X210DMCACM1 may be found through GE publications like series user guides, datasheets, or manuals.  All technical support for the 531x board series was originally provided by General Electric.

Our highly skilled technicians can repair your 531X210DMCACM1. All of our repairs come with a 3 Year AX Control Warranty. Please contact us for additional information about our repair process. To receive the repair pricing and lead time listed above please process your repair order via our website. The following repair options may be available upon request: