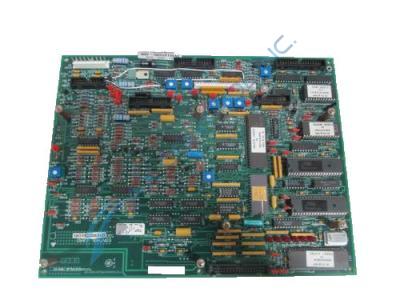 The 531X140CCHAMM2 is a circuit board originally fabricated by General Electric as part of the DC-300, the AC-300 and other general purpose drive systems.

The 531X140CCHAMM2 functions as a Control Card.  There are several versions of the Control Card PCB within the 531x series; please check your system manual for compatibility suggestions.  The board is component dense and is drilled in each corner for mounting. It has eight standoffs mounted into its surface that allows the addition of two auxiliary boards.  The board is also marked with a number of codes and with an optional F31X board number.

The 531X140CCHAMM2 has eight connectors on its surface, including two male header connectors and six male vertical pin cable connectors.  These connectors allow for communication with on-board and with off-board components, including other boards. The board has surface wiring in at least two places.

The 531X140CCHAMM2 has jumpers in over twenty locations.   It has eight potentiometers, twenty-five resistor network arrays, and thirty-plus integrated circuits. ICs include oscillating chips.  There are six LED indicators in a single line near the top left corner of the board. Other components include transistors, capacitors, diodes, and resistors.   Capacitors are made from a wide variety of materials, including ceramic, polyester vinyl, and electrolytic. Resistors are typically made from metal film.

More information on the 531X140CCHAMM2 and its individual components may be accessed through publications originally provided by the manufacturer, such as data sheets, user guides, or manuals.   GE provided all technical support for this board and other 531x series components.

Our highly skilled technicians can repair your 531X140CCHAMM2. All of our repairs come with a 3 Year AX Control Warranty. Please contact us for additional information about our repair process. To receive the repair pricing and lead time listed above please process your repair order via our website. The following repair options may be available upon request: