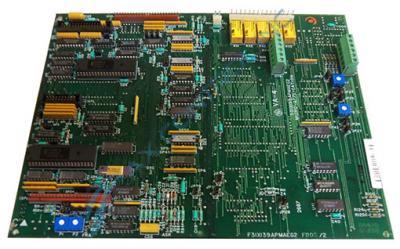 The 531X139APMAEG2 is part of the GE 531X series and is what is known as a PCB Micro Application Board. This board is generally used in industrial applications generally related to drive control. General Electric manufactured this board but it is currently not produced by GE and is classified as obsolete, however, AX Control still can supply this item.

This circuit board contains one hundred capacitors; these capacitors provide capacitance.  Essentially this is a storage of electrical energy contained in an electrical field. The 531X139APMAEG2 has two green towers with six screws on each tower, in addition, 531X139APMAEG2 has five male terminal ports used in conjunction with wiring harnesses to connect with surrounding circuit boards.

The 531X139APMAEG2 has twenty-one sets of Jumper Ports.  Jumpers are what lets a computer or a circuit board close an electrical circuit. The 531X139APMAEG2 has one hundred and nineteen resistors with strip marks.  Resistors, like the ones on this board, are color-coded which should tell an experienced engineer more information about how the board is to be used. There are several uses for these resistors including signal adjustment, voltage division, and bias control.

The 531X139APMAEG2 has twenty-eight Integrated Circuits which is also known as a monolithic integrated circuit, or an IC, microchip, or even generally simply as a chip. These chips are circuits generally made of silicon the point of which is to hold programming data. On this circuit board the data contained is contained on chips known as  EPROM or EEPROM, the difference being that EPROM can be reprogrammed.

Our highly skilled technicians can repair your 531X139APMAEG2. All of our repairs come with a 3 Year AX Control Warranty. Please contact us for additional information about our repair process. To receive the repair pricing and lead time listed above please process your repair order via our website. The following repair options may be available upon request: