Home Woodward ProAct and ProAct Plus Driver and Actuator 8404-213

The Woodward 8404-213 model ProAct Integrated Speed Control (PISC) III is designed to be used with ProAct ISCs and ITBs units. This model is base-mounted. Model 8404-213 weighs approximately thirty-two pounds and is only used with three PISC ITB models. 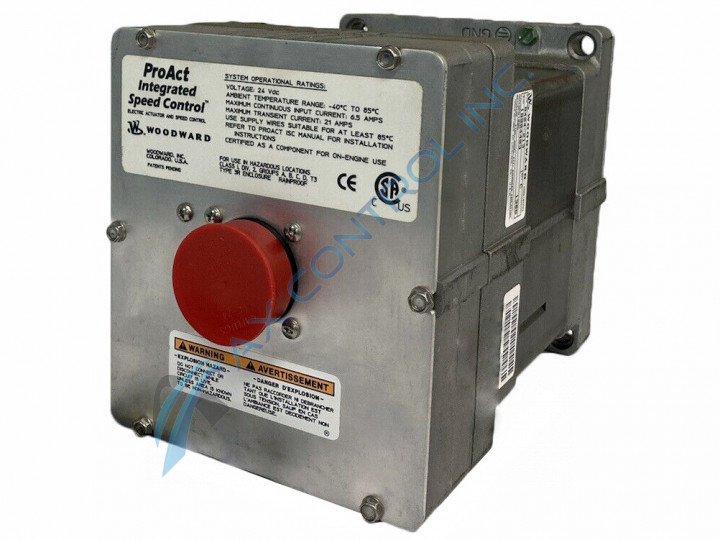 The Woodward 8404-213 model ProAct Integrated Speed Control (PISC) III is designed to be used with ProAct ISCs and ITBs units. This model is base-mounted. Model 8404-213 weighs approximately thirty-two pounds and is only used with three PISC ITB models.

The Woodward 8404-213 model is a ProAct Integrated Speed Control, this is a PISC III actuator. This model is part of the ProAct and ProAct Plus Actuator and Driver Series and can be used with a number of different drivers, which are the 8235-360, 8235-350, and 8235-351 models. Between the PISC III actuator and the aforementioned parts, there is a combined weight of nearly eighty pounds, as such please be cautious when mounting the two. For this reason, the PISC III model should only be base-mounted to avoid unnecessary amounts of stress on the two units.

The primary manual that is used alongside the 8404-213 is the 26246 ProAct ISC Integrated Speed Control Actuator Models I through IV, there is no part-specific manual that can be used since this manual covers all of the actuator models within the ProAct series.

Model 8404-213 functions on a current capacity of 15 A and a fused fast blow of 20 A. Please note that the fusing of input power is vital to ensure that there are no hazards, such as damage to the control valve, personal injury, and in dire circumstances an explosion.

Model 8404-213 can be oriented in any attitude just be sure that when mounted that attached bracket is as stiff as possible to ensure that the vibrations from the engines are not amplified. - AX Control Tech Team

Our highly skilled technicians can repair your 8404-213. All of our repairs come with a 3 Year AX Control Warranty. Please contact us for additional information about our repair process. To receive the repair pricing and lead time listed above please process your repair order via our website. The following repair options may be available upon request: