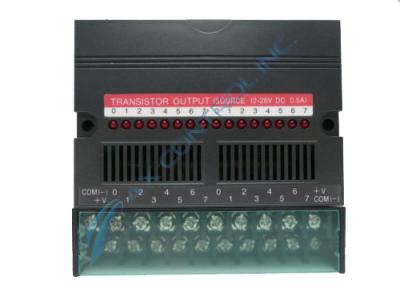 The 8005-TT-116 is a small rectangular module that weighs right around 0.5 lbs. It has two terminal strips on it that contain 10 M3.5 terminal screws on each of them. Four of the terminals are not actually connected together internally and are often not used. These four screws are labeled COM (-) +V. The other terminal screws are grouped by which side of the module they are on. The top and bottom screws on the right are labeled 0-7 and the top and bottom screws on the left are also labeled 0-7. There is a bank of sixteen LEDs that correspond to the active terminals. They are also labeled numerically according to their corresponding indicators. There are two air vents on the module that are between the indicator LEDs and the terminal strips. These air vents help to get air circulating to the internal components of the 8005-TT-116.

The 8005-TT-116 is transistor output module that connects onto the front of a SY/MAX Class 8005 programmable logic controller.

AX Control technicians can complete board level repairs on your 8005-TT-116. If you aren't sure why you device isn't functioning properly, AX Control can troubleshoot it for you.

Our highly skilled technicians can repair your 8005-TT-116. All of our repairs come with a 3 Year AX Control Warranty. Please contact us for additional information about our repair process. To receive the repair pricing and lead time listed above please process your repair order via our website. The following repair options may be available upon request: