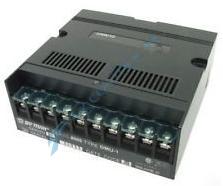 The 8005-RIU-10 is a Remote Interface Unit for a SY/MAX Class 8005 system. It was created by Schneider Electric Square-D.

The 8005-RIU-10 can be used in conjunction with a Network Link Unit (NLU-10) to form a connection with a PC or the SY/NET local area network (LAN). Forming this connection will create a total control system.

The 8005-RIU-10 is a small rectangular box that weighs roughly 0.48 lbs. This module has a very simple design. There is a terminal strip on its faceplate that has six total terminal screws. These terminal screws are labeled Shield, RXT+, RXT-, Shield, TXT+, and TXD-. The TXD-, TXD+ and first Shield terminal screws are also labeled transmit. The RXT-, RXT+, and second Shield terminal screws are labeled receive. Also on the faceplate is a small network LED indicator that will glow when it detects a network connection and a Model 50 CPU connection port. The cable that connects to this port is a patch/interconnect cable. There are two screws on the side of this unit that can be removed to allow the user access to the internal circuitry of the 8005-RIU-10. There are two brackets on this module that can be used to mount it onto a flat surface like a panel. The brackets are located on the top and bottom of the module and they have a small factory-drilled hole on each of them. Two screws can then be used to attach the module to the flat surface.

The 8005-RIU-10 is a remote interface unit used to control and communicate with a PLC and I/O modules.

The 8005-RIU-10 has six input/output points located in a vertical row on the front of the device.

AX Control makes offers on your decommissioned surplus and stock shelf surplus. Our technicians can make an offer on your
8005-RIU-10.

Our highly skilled technicians can repair your 8005-RIU-10. All of our repairs come with a 3 Year AX Control Warranty. Please contact us for additional information about our repair process. To receive the repair pricing and lead time listed above please process your repair order via our website. The following repair options may be available upon request: