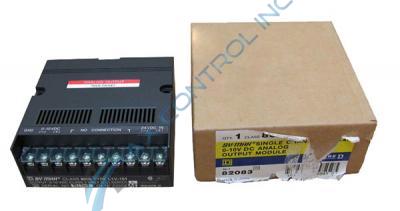 The 8005-LTV-101 is a SY/MAX Class 8005 Model 50 Analog Output Module. This module was originally created by Schneider Electric Square-D for its series of programmable controller hardware.

The 8005-LTV-101 has the ability to transform 8-bit data from a model 50 processor into 0-10 VDC output signals. This model is a single channel. This unit has a minimum permissible load impedance of 10 kilo-ohms. It has a maximum output response time of 1 msec and a photocoupler isolation method of 1500 RMS for 1 minute. It has a top output of around 9.961 volts. It also has an 8-bit resolution that is approximately 39.06 mV.  The output characteristics are broken down by the digital value and its corresponding analog output value. It ranges from a digital value of 255 to 0 and analog values that range from 9.961 volts to 0 volts. This unit needs an external power supply that has the capacity to provide 24 VDCs and a maximum current draw of 70 mA.

The 8005-LTV-101 is a small rectangular box that weighs right around 0.30 lbs. It has a terminal strip on the front that has a total of 10 terminal screws. The terminal screws are type M3.5. One screw is labeled GND. Two are labeled (-) (+) 0-10 VDC. Five are labeled No Connection and two are labeled (-)(+) 24 VDC In. This module also has a series of air vents on the top of it that helps to promote airflow to the internal module components. There are also two factory drilled holes on the top of the module that can be used to mount it.

The 8005-LTV-101 is given a three year warranty after it is purchased with AX Control. If the 8005-LTV-101 stops working, AX Control will replace the device, repair the issue, or issue you a full refund.

Our highly skilled technicians can repair your 8005-LTV-101. All of our repairs come with a 3 Year AX Control Warranty. Please contact us for additional information about our repair process. To receive the repair pricing and lead time listed above please process your repair order via our website. The following repair options may be available upon request: