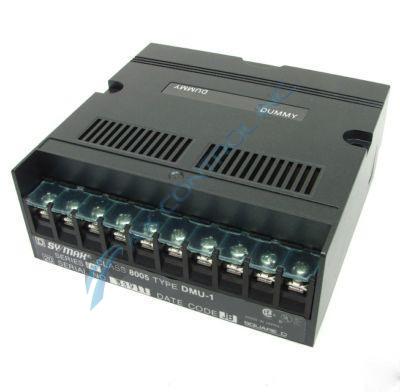 The 8005-DN-216 is a DC Input Module created by Square-D. It is no longer being suopported by this company and may be tough to find. AX Control, however, still tries to retain it in stock.

The 8005-DN-216 is a 16 Function 24 VDC Source Input Module. It has an isolation method that uses a photocoupler and a top internal current draw of 40mA. It has an input voltage that ranges between 10-30 VDCs. It has 16 input points with an 8-point per common connection. It can maintain a 7 milliseconds turn on time and a 10 VDC turn on voltage. It has an 11 millisecond turn off time and a turn off voltage of 3 VDCs. It has a 2.3 k-ohms input impedance. This unit weighs roughly 170 grams.

Overall, there is a total of 16 LED lights on the 8005-DN-216. These indicators have corresponding terminal screws that they are monitoring. The LEDs will glow red when there are wires attached to its terminal. There are two terminals labeled NC that should not have anything attached to them. There are also two terminals labeled COM (+) that are not typically internally connected. The terminal screws on this device are the M3.5 type.

AX Control can preform board level repairs on any of your devices, including the 8005-DN-216. When the repairs are complete AX Control technicians will run the fully function test to ensure your 8005-DN-216 is fully repaired.

Our highly skilled technicians can repair your 8005-DN-216. All of our repairs come with a 3 Year AX Control Warranty. Please contact us for additional information about our repair process. To receive the repair pricing and lead time listed above please process your repair order via our website. The following repair options may be available upon request: