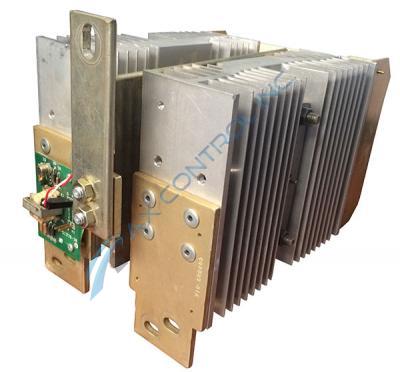 The 86466-79R is an Upper AC Heat Sink Assembly that was initially created and mass-produced by Reliance Electric.

The 86466-79R is also known as a rectifier stack. A rectifier stack has the ability to transform AC current into a more stable DC current. This part was originally made for Reliance’s 300 to 500HP Variable Torque AC V*S Drive Controller systems.

The 86466-79R is a set of vertical heatsinks that are connected by a center metal carrier. There are a set of brackets on the top of the module that can be used to attach this module to another rectifier stack. There is a small printed circuit board that is positioned on the top of the module. This PCB is a PC gate coupling card. It has four-pin connections, diodes, resistors, and a large transformer on it. The transformer is held in place using a metal bar. The PCB is attached to the rectifier stack using screws. This card can be easily replaced if it is damaged. This module is roughly 23 lbs.

For more information about the installation of the 86466-79R, please refer to the Reliance Electric Instruction Manual: D2-3024-1.

Our highly skilled technicians can repair your 86466-79R. All of our repairs come with a 3 Year AX Control Warranty. Please contact us for additional information about our repair process. To receive the repair pricing and lead time listed above please process your repair order via our website. The following repair options may be available upon request: