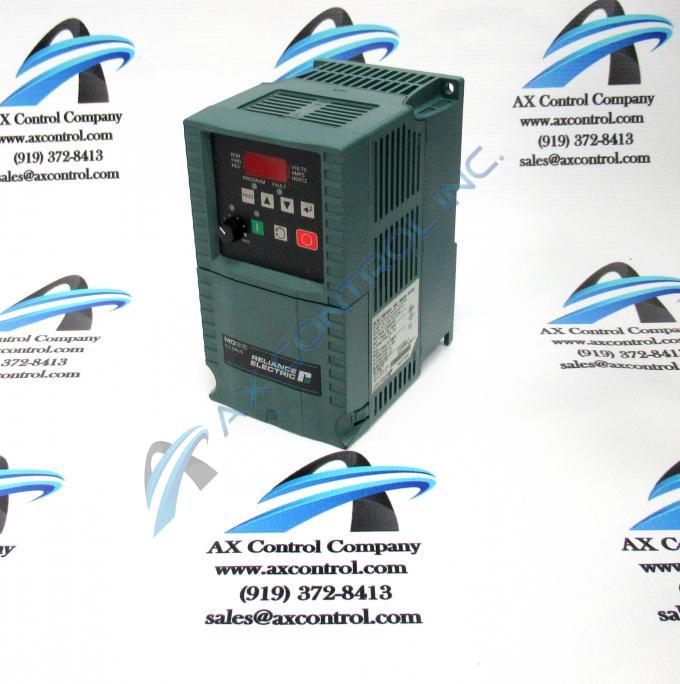 The 6MDBN-8P0102 is a 2 HP MD65 Reliance Electric AC Drive. This drive could have been also mass-produced by Baldor Reliance and/or ABB, but support for it has since been suspended. It may be a little hard to find, but AX Control still tries to keep it stocked.

The 6MDBN-8P0102 is a small rectangular box. It has a faceplate with several key features. It has a 4-character LED display with a series of 6 LED indicators surrounding it. These LEDs are labeled Run, FWD, REV, Volts, Amps, and Hertz. There are two other indicators that are directly below the display that are labeled Program and Fault. Below that are four keys that are labeled PROG, enter, and two up/down arrow keys. Below that is a min/max dial with a dedicated LED, a green power button with an LED, a reset button, and a stop button.

What motors are compatible with the 6MDBN-8P0102?

The 6MDBN-8P0102 is compatible with both Reliance S-Series and F-Series motors.

Does AX Control offer a warranty with the 6MDBN-8P0102?

Yes, AX Control offers a two year warranty with all drives we sell including the 6MDBN-8P0102. If your 6MDBN-8P0102 stops working please contact us and we will send you a new drive, complete any repairs, or grant you a full refund.

Our highly skilled technicians can repair your 6MDBN-8P0102. All of our repairs come with a 3 Year AX Control Warranty. Please contact us for additional information about our repair process. To receive the repair pricing and lead time listed above please process your repair order via our website. The following repair options may be available upon request: