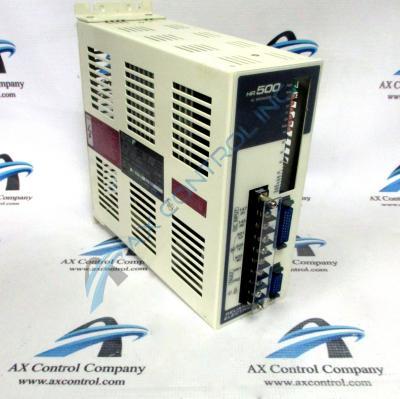 The 5RA0400 model is a Chassis Amplifier model created and manufactured by Reliance Electric. The 5RA0400 model was designed to be included as part of the HR500 series of motors and servos.

The 5RA0400 Chassis Amplifier is associated with the 5RM2400 model motor, which is also part of the HR500 series. This motor has a TENV type motor enclosure and an FF115 IEC Flange Mounting. Additionally, the motor’s nominal horsepower is ½ and its power rating is 400 Watts. The constant torque rating of the motor is 16.9 lbs., its base speed is 2000 RPM, and its inertia rating is 20.4 lb. in s^2 x 10^-4. The 5RM2400 motor can also be found on AX Control’s website for your convenience, in case you need to order both of these associate products at once: https://www.axcontrol.com/automation/reliance-electric/hr500-servo/5RM2400.

The HR500 motors, such as the 5RM2400 motor that is associated with the 5RA0400 chassis amplifier, were designed to be placed in industrial settings. There are plenty of features included with the HR500 motors that are able to maximize the overall performance of the motor. The HR500 motors operate on either single phase or three phase 208/230 VAC and 50/60 Hz input. TheseHR500 motors have rare earth magnets within them, and those are used in the motor to sustain an acceptable ratio of torque and inertia. In order to allow accurate speed and position regulation during the HR500 motor’s entire operation range, the motor is outfitted with an optical encoder.

Our highly skilled technicians can repair your 5RA0400. All of our repairs come with a 3 Year AX Control Warranty. Please contact us for additional information about our repair process. To receive the repair pricing and lead time listed above please process your repair order via our website. The following repair options may be available upon request: