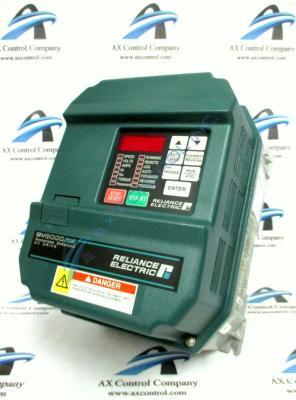 The 5V2160 is a 5HP 200-230 VAC GV3000/SE AC Drive. It is version 6.04 of this particular series of drives. It was initially made by Reliance Electric, but it could have also been mass-produced under the ABB and Baldor Reliance manufacturing names. In order to find this drive, please consult AX Control who does try to keep this legacy series in stock.

The 5V2160 is a PWM (pulse-width-modulation) drive that has the ability to flip-flop between using vector or volts/hertz regulation. It has a 30 kiloamps short circuit rating. It has an input of 9.6 KVA and a maximum amperage of 24.2 A. It has a maximum output amperage of 21A and a power loss of 180 watts.

The type of housing the 5V2160 sports is a NEMA 1 style enclosure. This enclosure should only be used within an inside environment away from excessive dust and liquids. This enclosure is not dust/drip tight. It does come with circulation vents on its sides and bottom. It has an external fan that is situated on its back. There are two large wired connections on the bottom of the 5V2160. Because of these connections, this device should be mounted on to a panel or flat surface. It should never be installed horizontally and should only be mounted vertically. In order to ensure a very secure mount to the panel, it is recommended that both bolts and washers be used.

The 5V2160 has a few basic components that it maintains within its enclosure. It has a keypad with attached mounting bracket, a regulator card, two base boards (PISC and GVPB), and an internal fan assembly that aids the external fan assembly.

Terminals 4-9 on 5V2160 are the encoder connections terminals.

Our highly skilled technicians can repair your 5V2160. All of our repairs come with a 3 Year AX Control Warranty. Please contact us for additional information about our repair process. To receive the repair pricing and lead time listed above please process your repair order via our website. The following repair options may be available upon request: