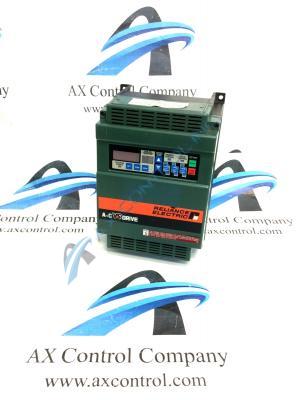 The 2GU22003 is a 3HP 230V 5KVA drive that is a 3-Phase GP2000 AC V*S drive. It was originally created by Reliance Electric but could have also been sold by ABB or Baldor Reliance. It is in charge of varying the speed, voltage, and frequency of a motor.

When you open the 2GU22003, you will be presented with various components. There is a keypad that is connected to a regulator using CN1 and CN2 connectors. The regulator is connected to many different things including a fan, a leakage current sensor, a DRC, a hall effect current sensor, a power supply with a base driver, and two ACCTs. The regulator can also be connected to an optional kit using CN21 and CN22 connectors. There is a diode cube, precharge relay, precharge resistor, a bus clamp, a transistor module, and a voltage detect resistor.

We are happy to send you a link to the GP2000 Instruction Manual. The manual provides instruction on installation, startup, adjustment, operation, and troubleshooting on GP2000 drives.The manual also lists parameters, alarms, and faults.

What is the displacement power factor on a 2GU22003?

Our highly skilled technicians can repair your 2GU22003. All of our repairs come with a 3 Year AX Control Warranty. Please contact us for additional information about our repair process. To receive the repair pricing and lead time listed above please process your repair order via our website. The following repair options may be available upon request: