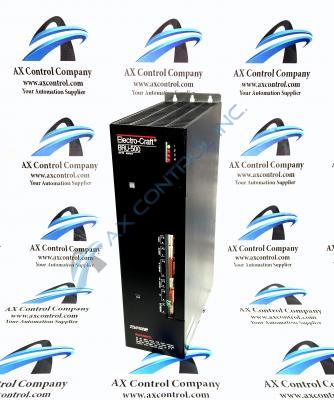 The 9101-0101 is an Electro-Craft BRU-500 Drive Module. It was originally made by Reliance Electric and could have also been sold by Baldor Reliance or ABB.

The 9101-0101 has many important features on its enclosure. On the bottom of the enclosure, it has two external fan assemblies that help the internal components remain cool. It has air vents on the top that also aid with keeping the air flowing to the drive components. It has a single bank of LEDs on the faceplate that are numerically labeled 1-4. The LED labeled 1 is green while the others are red.  There is a bank of terminals on the faceplate that are broken up into six specific groups. The terminals are labeled P1 Controller, P2 IO, P3 Encoder Out, P4 Encoder In, P5 Monitor, and P6 Serial. There are brackets on the back of the module with factory-drilled holes that can be used to mount the 9101-0101 to a flat surface like the backplate of an enclosure. This module should be mounted in an environment that is clean and free of combustible or corrosive materials.

The 9101-0101 is comaptible with multiple Reliance Electric transformers. There are a variety of power ratings.

The 9101-0101 should be installed on a flat surface and in an environment with little moisture in the air.

Our highly skilled technicians can repair your 9101-0101. All of our repairs come with a 3 Year AX Control Warranty. Please contact us for additional information about our repair process. To receive the repair pricing and lead time listed above please process your repair order via our website. The following repair options may be available upon request: