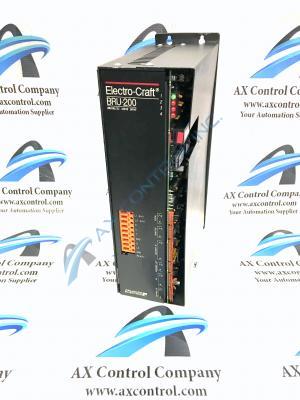 The 9101-1180 is a BRU-200 series DM-20D Model 20-amp servo drive that has a d-shell connector. This servo drive is a part of Reliance’s legacy series of parts. Depending on its original manufacturing dates, it could have also been a part of the ABB or Baldor Reliance product lines. This part may also be found under the alternate part numbers DM-20D or BRU-200-DM-20D.

The 9101-1180 possesses a chassis that is in an open style. Its internal circuitry is exposed next to the faceplate. The faceplate has several components that include connections and LEDs. There is a group of four LED indicator lights. There is one green and three red LEDs in this grouping. They will glow when the drive is running as it should or when it is not working properly. There are two terminal strips on the faceplate. One is in the top left corner and the other is in the bottom left corner. The one on top is for the external shunt while the bottom is for the motor connection and the DC bus. There are also three serial RS-232 connection ports. They are labeled P1-controller, P2-motor encoder, and P3-serial. There is a circulation fan on the bottom of this drive that helps to cool the internal circuitry of the drive.

Is the 9101-1180 compatible with Reliance personality modules?

Yes, there is a slot on the exterior of the 9101-1180 where you can attach a personality module.

Yes, AX Control technicians are able to troubleshoot your 9101-1180 to figure out why it isn't functioning correctly. After the problem is identified, we can complete any repairs needed.

Our highly skilled technicians can repair your 9101-1180. All of our repairs come with a 3 Year AX Control Warranty. Please contact us for additional information about our repair process. To receive the repair pricing and lead time listed above please process your repair order via our website. The following repair options may be available upon request: