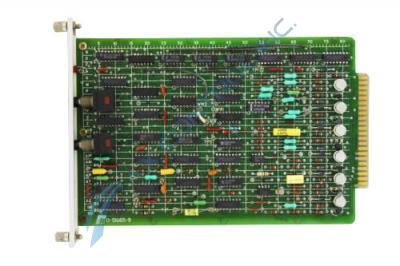 The O-57554- Shark Interface module is comprised of two main components: its faceplate and its printed circuit board. The module’s faceplate consists of a 9-pin female D-shell connector, which has the label “NETWORK” printed above it, and two green status indicator LEDs. The top LED, which has the label “CPU OK” printed above it, lets the operator know that the module has successfully undergone its power-up diagnostic routine and it working as intended. Below that, there is the other LED, which is labeled as “COM OK,” that lets the operator know that the module is communicating properly with the Remote I/O network. Be aware, though, that this LED will begin flashing whenever an invalid drop number has been selected on the rotary switch below it. The rotary switch has sixteen positions that can select drop positions of 1 to 7 or 9 to F. In the event that you need to change the drop number for the rack, then you will need to alter the setting of the rotary switch and the cycle the power for the module. Upon power-up, the rotary switch is in read-only mode.

The Reliance O-57554- plugs into the backplane of a Shark rack. Place the O-57554- in the first slot to the right of the power supply.

Our highly skilled technicians can repair your O-57554-. All of our repairs come with a 3 Year AX Control Warranty. Please contact us for additional information about our repair process. To receive the repair pricing and lead time listed above please process your repair order via our website. The following repair options may be available upon request: