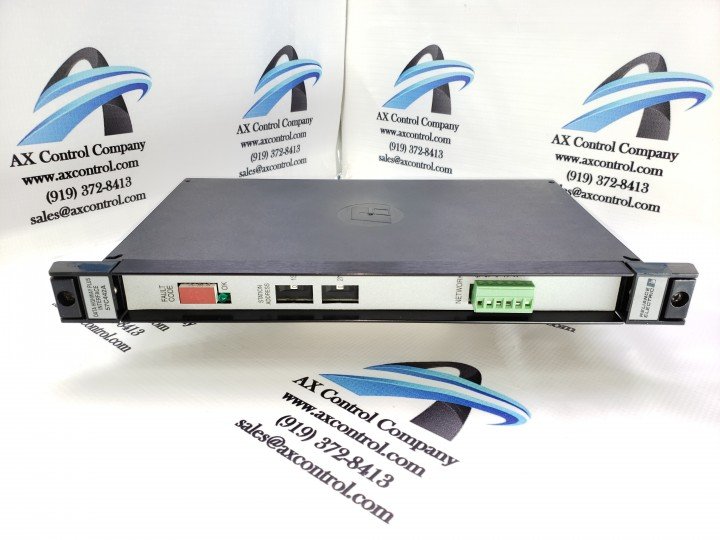 The 57C442 is a Reliance Electric Data Highway Plus Interface Module. This module could have also been manufactured by Baldor Reliance and/or Asea Brown Boveri. None of these corporations still support the 57C442, but AX Control does try to make every effort to continue to keep it in stock.

The 57C442 is an 8mHZ Interface Module that is used for an A-B Data Highway. It has a 32K dual memory port and has an input rating of 5VDC at 650 mA. This module has the ability to have a separate memory area that can be used to transmit statistical data. This data can be accessed by other devices on the network.

The 57C442 has several features on its faceplate. It has a 7-segment LED fault code indicator that lets the user know if there are error codes for the device. There is a green OK LED indicator that lets the user know the system is functioning properly. There are two station address thumbwheel dials and there is a network port. The station address thumbwheels provide the Station Numbers (0-77) where the card can reside on the network. Upon startup, an AutoMax processor will read where the card is located on the network.

This card plugs precisely into an AutoMax card storage assembly. The user has the ability to slide it through the open side of the rack and then plug it into two card slots on the backplane of the rack. Then the card can be secured onto the rack using two screws and mounting brackets on the rack.

The manual for 57C442, Manual J2-3067- the Data Highway Plus Interface Module Manual specifically for 57C442 has all you need to know about 57C442. The manual gives a mechanical and electrical description of 57C442, the manual goes through installation and programming a Reliance 57C442, and the manual provides diagnostics and troubleshooting.

What does 57C442 provide direct connection to?

57C442 provides a direct connection for the AutoMax system to the Allen-Bradley Data Highway Plus network.

There are several model numbers of ReSource AutoMax Programming Executive software to use with 57C442. For more hardware and software related to 57C442, view section 1.2 in the manual - Manual J2-3067.

What size microprocessor does 57C442 have?

Our highly skilled technicians can repair your 57C442. All of our repairs come with a 3 Year AX Control Warranty. Please contact us for additional information about our repair process. To receive the repair pricing and lead time listed above please process your repair order via our website. The following repair options may be available upon request: