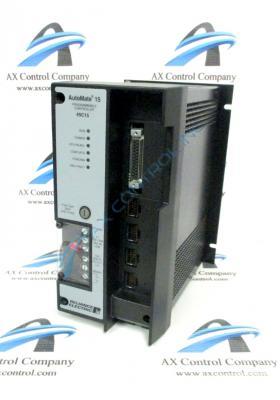 Reliance Electric was responsible for the creation of the 45C15 AutoMate programmable controller. Should you find yourself in need of the 45C15 programmable controller, then AX Control is your best option. We make an attempt to keep this product in stock even though it is considered a discontinued product by the original manufacturer, so be sure to contact us to inquire about its availability.

The 45C15 programmable controller is a large, rectangular device with only a few different components on its faceplate. There are six status indicator lights which will illuminate whenever the following labeled statues are relevant: “RUN,” “POWER,” “CPU READY,” “COM DATA,” “FORCING,” and “RAIL FAULT.” Below those lights, there is a fuse that is labeled as being “115/230 VAC, 3AG, 1 Amp.” Below the fuse, there are six terminals which all have different functions. On the right of all of these different components, there are five ports: the top one is a large female port while the remaining four are smaller male ports.

What are some positive qualities 45C15 has?

45C15 is small in size, and 45C15 has exceptional speed, functionality, and realiability.

How many registers does 45C15 have?

Our highly skilled technicians can repair your 45C15. All of our repairs come with a 3 Year AX Control Warranty. Please contact us for additional information about our repair process. To receive the repair pricing and lead time listed above please process your repair order via our website. The following repair options may be available upon request: