Sell Surplus: Have a KV-E8X to sell? Sell Now 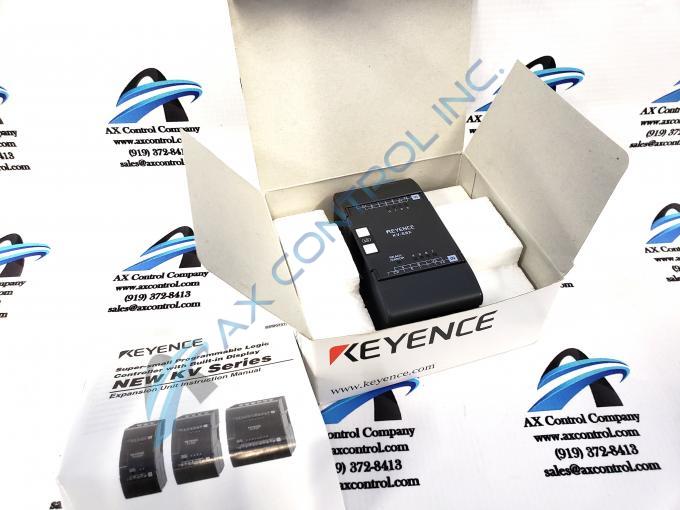 Sell Surplus: Have a KV-E8X to sell? Sell Now

KV-E8X is an eight (8) input device made by Keyence. The KV-E8X has a minimum ON voltage of nineteen (19)V. The maximum OFF current of the KV-E8X is two(2)mA. The KV-E8X by Keyence has an input time constant (switchable between two (2) levels by using special auxiliary relays 2609 to 2612) with a ten (10) ms ± twenty percent (20%), ten(10) µs ± twenty(20%) for both rising (OFF to ON) and falling (ON to OFF) edges. The KV-E8X has a vibration resistance and a continuous vibration frequency of ten (10) to fifty-seven (57) Hz. The KV-E8X in twenty-four (24) V mode has an input maximum rating of twenty-six point four (26.4) VDC. The KV-E8X has an input voltage of twenty-four (24) VDC, five-point three (5.3) mA. The KV-E8X has an impedance of four point three (4.3) kΩ. The Keyence KV-E8X also has four (4) common inputs.  The KV-E8X has seven (7) screw ports along the top and the bottom of the device. The KV-E8X is labeled in purple writing along the top it reads C1 zero through three (C1 0-3) than V1 and V2, with an IN port on the top left of the device. Along the bottom of the device is labeled C2 four through seven (4-7) V3 and V4 with an IN port on the bottom left of the device. The Keyence KV-E8X also has a black and white wiring harness on the left, in order to easily connect to another device.

Our highly skilled technicians can repair your KV-E8X. All of our repairs come with a 3 Year AX Control Warranty. Please contact us for additional information about our repair process. To receive the repair pricing and lead time listed above please process your repair order via our website. The following repair options may be available upon request: