Sell Surplus: Have a KV-E4T to sell? Sell Now 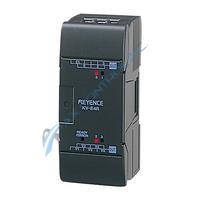 Sell Surplus: Have a KV-E4T to sell? Sell Now

The KV-E4T is a four (4) transistor sink output device by Keyence. The KV-E4T has a thirty (30) VDC rated load voltage. The KV-E4T has a rated output current of zero point five (0.5) A/output. The LV-E4T has a current Leakage while turned OFF of one-hundred (100) µA or less. While turned ON the KV-E4T ha a residual voltage of zero point eight (0.8) V or less. The KV-E4T has a startup operation time (OFF to ON) of fifty (50) µs or less. The operation startup time of the KV-E4T (ON to OFF) is two-hundred and fifty (250) µs or less. The common output or COM is shared internally. The KV-E4T weighs approximately eight (80) grams. The Keyence KV-E4T is a small device made of black plastic. The KV-E4T has a small wiring harness on the left. The KV-E4T has two (2) white buttons on the left labeled "CH". The KV-E4T has five (5) LED lights labeled zero through three (0-3) and READY/ERROR. Along the top of the device labeled in purple are a serious on numbers and letters for corresponding screw ports. C1 zero through three (C1 0-3) with an OUT port on the top right. Along the bottom of the KV-E4T also labeled in purple are a series of letters and numbers as well with corresponding screw ports. Labeled V1, V2, V3, V4, V5 along with an OUT port on the bottom right. Each KV-E4T also has several vents along the bottom of the device for proper air flow.

Our highly skilled technicians can repair your KV-E4T. All of our repairs come with a 3 Year AX Control Warranty. Please contact us for additional information about our repair process. To receive the repair pricing and lead time listed above please process your repair order via our website. The following repair options may be available upon request: