Sell Surplus: Have a KV-10DT to sell? Sell Now 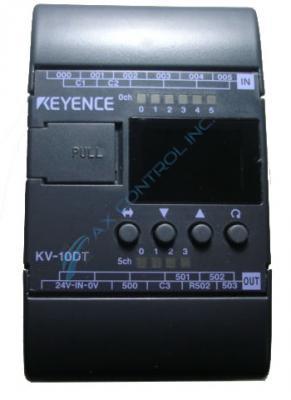 Sell Surplus: Have a KV-10DT to sell? Sell Now

The Keyence Visual KV Series KV-10DT is a high end model that is compatible that functions like the conventional KV Series units. The other KV Keyence units that support the ladder software can also use peripheral units. Never change all the functions on the ladder builder software, the KV-10DT basic unit will be damaged. Unfortunately, some of the programming makes the peripheral units incompatible with the conventional Keyence KV Series. The KV-10DT is not included in this list of incompatible units. Close attention should be taken when doing any writes in the "Run" mode, depending on the situation, it can become dangerous to connect to the PLC. Data is not saved on the EEPROM if a ladder program is changed, only when the unit is still on. For the KV Visual series, the data will be saved on the SRAM and then saved on to the EEPROM when the KV-10DT is turned back on. If the Keyence Visual KV-10DT unit is off for more than 2 months, the ladder programming could have become corrupted. In order to prevent the software from becoming corrupt, turn the KV-10DT unit on once so the program is saved on the EEPROM. Transferring a program can work, but if an error displays on the Keyence Visual KV Series basic units, only while you are writing a program with the unit in run mode, the program might be deleted. Try transferring the program again and this should help with the existing program. Refer to the manual for help.

Our highly skilled technicians can repair your KV-10DT. All of our repairs come with a 3 Year AX Control Warranty. Please contact us for additional information about our repair process. To receive the repair pricing and lead time listed above please process your repair order via our website. The following repair options may be available upon request: