Sell Surplus: Have a KV-U2 to sell? Sell Now 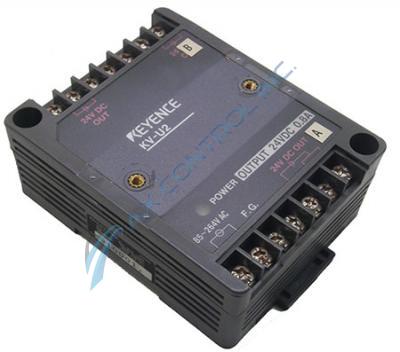 Sell Surplus: Have a KV-U2 to sell? Sell Now

The KV-U2 is a power supply unit by Keyence. The KV-U2 has a switching type operating system. The KV-U2 has a power supply voltage of one hundred (100) to two hundred and forty (240) VAC ( fifty (50) / sixty (60) Hz) plus or minus ten percent (10%). The KV-U2 has an output voltage of twenty-four (24) VDC plus or minus ten percent (10%), (Ripple: two-hundred and forty (240) m Vp-p max). The output current of the KV-U2 is zero point eight (0.8) A. The KV-U2 weighs approximately one-hundred and seventy (170) grams.  The Keyence KV-U2 is made of dark grey plastic, with seven (7) screw ports along the top and bottom of the device. Each set of ports is covered with clear plastic, to protect the ports from dirt and debris. The top of the KV-U2's first two ports are labeled in pink stating twenty-four (24) DC OUT. The last two ports on the top the KV-U2 are also labeled in pink, stating twenty-four (24) DC OUT. Along the bottom the first two ports are labeled in white, stating eighty-five (85) ~ two-hundred and sixty-four (264) VAC. To the right of that is F. G. labeled in white. The last three screw ports are labeled in pink stating twenty-four (24) V DC OUT. The Keyence KV-U2 has one LED power light. To the right of the light in white are the words OUTPUT twenty-four (24) VDC zero point eight (0.8) A.
The Keyence KV-U2 also features vents on all sides to allow for proper airflow to cool the device.

Our highly skilled technicians can repair your KV-U2. All of our repairs come with a 3 Year AX Control Warranty. Please contact us for additional information about our repair process. To receive the repair pricing and lead time listed above please process your repair order via our website. The following repair options may be available upon request: