Sell Surplus: Have a KV-8ET to sell? Sell Now 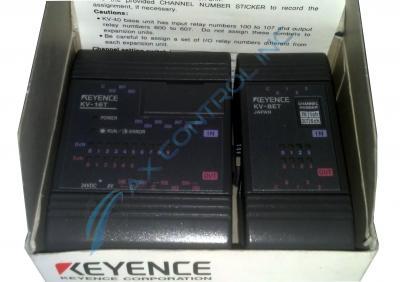 Sell Surplus: Have a KV-8ET to sell? Sell Now

The KV-8ET is an expansion pack offered by Keyence. The KV-8ET is a compact expansion unit that allows you to expand your number of I/Os without taking up a lot of space. It easily installs to your current system with two metal eyelets in the back and a wiring harness along the left side of the PLC. The KV-8ET features four (4) inputs and four (4) Transistor outputs. The KV-8ET has a rise time (OFF to ON) of fifty (50) us or less. The KV-8ET has a rated output current of 0.5 A /point, with a residual voltage when ON if 0.8 V or less. The KV-8ET has an even fixed Parity bit and an ER data flow control. The KV-8ET by Keyence is compatible with Windows Ladder Control programming. Simply program the PLC with a handheld programmer or a PC. With the ability to enter data with a mouse or a keyboard allows for quick and accurate programming. The KV-8ET requires a twenty-four (24) VDC and has a seven (7) A current consumption rate. The KV-8ER requires a thirty (30) VDC transistor and has a peak current load of five (5) A.
The KV-8ET by Keyence features five (5) screw in wire ports along the top and the bottom. The top is labeled C zero through three (C0-3) in purple, with the same series along the bottom labeled in pink. Each series of numbers has a corresponding color-coded labeled LED light in the center of the face-plate. Easily expand with IN and OUT ports along the right side of the PLC as well.

Our highly skilled technicians can repair your KV-8ET. All of our repairs come with a 3 Year AX Control Warranty. Please contact us for additional information about our repair process. To receive the repair pricing and lead time listed above please process your repair order via our website. The following repair options may be available upon request: