Sell Surplus: Have a KV-16EYT to sell? Sell Now 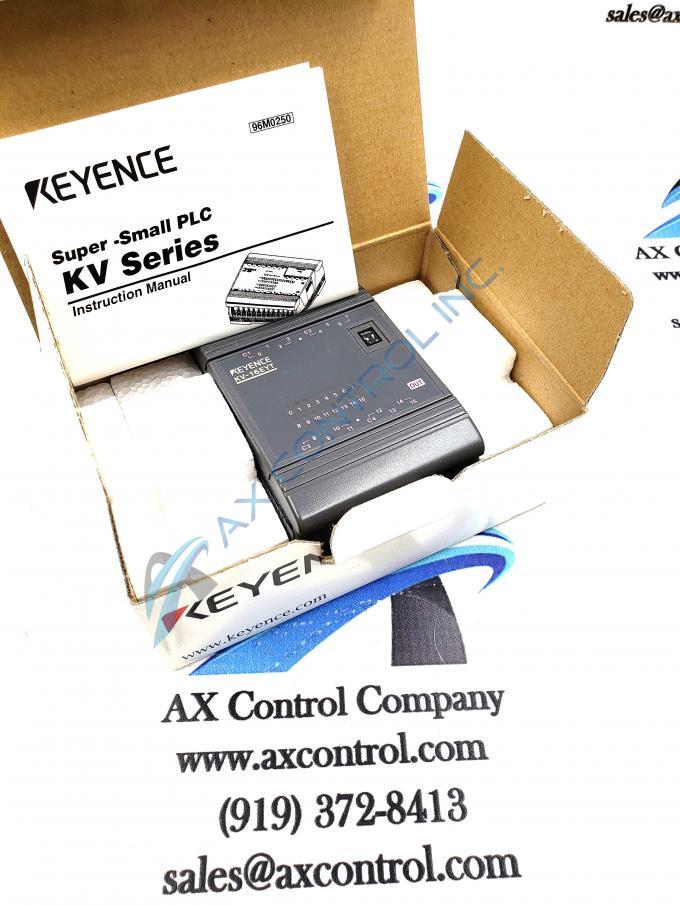 Sell Surplus: Have a KV-16EYT to sell? Sell Now

KV-16EYT is an expansion unit and it is part of the KV Series of Ultra Package Type PLC. Keyence is a Japanese company that is renowned the world over for its small, fast, and efficient PLC line. The KV series of Micro PLCs features expandable I/O as well as simple Ladder Builder software. These features allow for installation that allows the user to save precious space.

KV-16EYT is a small Keyence module made of black plastic.  The unit features several inputs and outputs and 15 numbered LED lights on the front of the unit. The bottom front of the unit has the word "out" to indicate output and a sequence of numbers ranging from C3-8 9 10-11 C4-12 13 14-15.

The underside of the unit features a power connector cable. There are also 11 connections for wires at the top of KV-16EYT, around which is venting to allow the unit to maintain a proper operating temperature even in higher temperature conditions. The underside of the unit features two metal hanging brackets.  The unit can be panel mounted using these brackets.

Keyence touts the KV Series as "the world's smallest PLCs", and make note of the fact that the series has many expansion units, of which KV-16EYT is one. The unit has 16 transistors (sink) outputs. KV-16EYT is a peripheral unit that is incompatible when attempting to use with the Visual KV Series by Keyence. Other peripheral units that are incompatible with Visual KV are KV-8ER/8ET/8EX/16EX/ 8EYR/8EYT/16EYR/.

How can I have a contact protection circuit in my Keyence expansion Unit?

There is a rush current when using solenoids, clutches, and motors, this rush current can flow when the unit is turned on with the load power supply. Also when shuting down the load power supply a counter electromotive voltage can flow. This can cause the shortening of the life of the service contacts, but this can be prevented, if a contact protection circuit is provided. There is a diagram in the manual that shows exactly how to set up a contact protection circuit for an AC load 1 and 2, and for a DC load 1 and 2. These figures can be found in chapter 2 page# 93, with the manual part number being 96M0364. Some suggestions are to use a load coil that has a lower rating than the contact capacity itself. Also using a diode with a peak inverse voltage of 10x the circuit or more voltage and with a forward current that is not any less than the load current.

Our highly skilled technicians can repair your KV-16EYT. All of our repairs come with a 3 Year AX Control Warranty. Please contact us for additional information about our repair process. To receive the repair pricing and lead time listed above please process your repair order via our website. The following repair options may be available upon request: