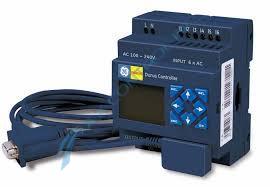 IC210NAR020 is a GE Fanuc Durus series PLC. The PLC (programmable logic controller) is an industrial digital computer which is made especially for the control of manufacturing processes, such as assembly lines, robotic devices, or any activity that requires high reliability control and ease of programming. To achieve that, this controller has been optimized to operate reliably in harsh environments and conditions, such as strong vibrations, extreme temperatures, and wet or dusty conditions. Durus PLC is used massively in automobile industry to provide flexible, rugged, and easily programmable controllers to replace hard-wired relays, timers and sequencers. The Durus series has been widely accepted as high-reliability automation controllers suitable for harsh environments.

GE Intelligent Platforms’ Durus Controller is the ideal example of a PLC used in modern industrial production lines. This PLC is built to withstand many types of industrial environment, with standard features like a built-in operator interface. The Durus series features controllers with LCD keypads, analog screens, and transistor input and outputs. The controller has an easy-to-use design which enables the user to get their machine running quickly and smoothly. IC210NAR020 uses an AC power source and is a 20 point non-expandable model. Filled with state-of-the-art features, Durus Controller’s rugged design allows for installation in harsh environment. This model comes with standard features such as a built-in operator interface, 8 amp relay outputs, expansion slots, and a memory module.

Users can use customized programs for this device using the built-in display and keypad or with the Durus Controls Software. A PDA to the Durus Programming Cable is provided to upload the program. The Durus Software offers a simulation mode that allows the users to virtually run the program in the computer to examine the program and eliminate errors before putting it to use in the production environment.

Our highly skilled technicians can repair your IC210NAR020. All of our repairs come with a 3 Year AX Control Warranty. Please contact us for additional information about our repair process. To receive the repair pricing and lead time listed above please process your repair order via our website. The following repair options may be available upon request: