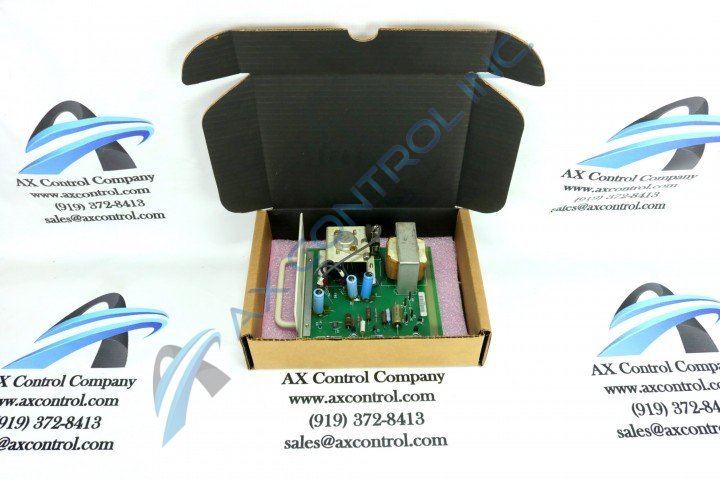 The 193X717ACG01 is a Power Supply circuit board manufactured by GE for their DC Drive systems.  This includes the Speed Variator Drive, the SCR drive, as well as other compatible drives.

The 193X717ACG01 is manufactured with a large front panel that includes the board use (Power Supply,) the board id number, and the General Electric logo.  The front panel includes a rounded handle, which helps technicians with the insertion or removal of the board from rack systems for replacement or maintenance.  The front panel attaches to the PCB using two screws inserted through a flange in the panel, through the bottom of the PCB and then through a flat metal reinforcement that has been placed across the top of the board.

The 193X717ACG01 is populated with a single transformer mounted in a frame. This component is placed next to a C-shaped metal housing that connects to the board surface by two screws.  There is a single fuse attached to the side of this housing and another fuse attached to its top. Black wires attach from one side of the side fuse to the board surface.  Other similar wires are located near or under the housing. There is also a single large transistor attached by two screws to the top of the housing. The board also uses five smaller transistors.

The 193X717ACG01 use both electrolytic and polyester vinyl capacitors, as well as capacitors of other material.  Resistors are both metal film and carbon composite material. The board has four vertical metal brackets located near the rear edge for mounting components above the surface of the board.

Our highly skilled technicians can repair your 193X717ACG01. All of our repairs come with a 3 Year AX Control Warranty. Please contact us for additional information about our repair process. To receive the repair pricing and lead time listed above please process your repair order via our website. The following repair options may be available upon request: