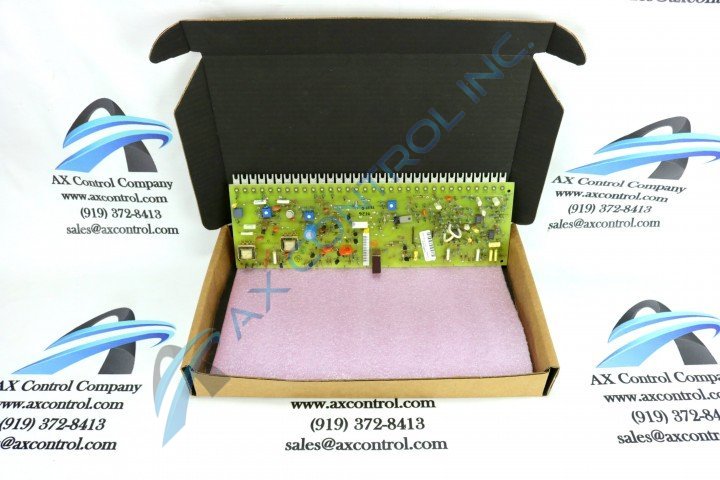 The 193X528ADG01 is what is called an interface card. This is a type of printed circuit board or PCB. The 193X528ADG01 was produced to be a part of the 193x series by General Electric or GE.

The 193X528ADG01 is a long printed circuit board which is shaped like a rectangle and contains various electronic components. A long line of metal components is featured on the bottom edge of the PCB. Thirty-two (32) of these metal pieces are featured which have labels such as DCP, DCN, SC, SB, SA, RT3, RT2, RT1, SYS, EST, TKN, TKP, TFB, SMAX, TFB, SMAX, TFR, SMET, RSET, CFB, +20V, IMET, COM, OSC, -20V, CEMF, MAC, IPU, DMI3, DMI2, PRE, and RTR. One (1) potentiometer is featured at the top of the 193X528ADG01 in the center. A potentiometer, sometimes called a variable resistor, can be adjusted to change the resistance of the component. Two (2) large yellow components which are shaped like squares. These components are labeled with the part number DB016. A number of different capacitors can be found on the 193X528ADG01. One (1) large capacitor which is light blue is positioned on the right side of the PCB. Many solid yellow capacitors are situated in various places all around the 193X528ADG01. Three (3) integrated circuits have been placed on the left half of the 193X528ADG01. Integrated circuits are devices which consist of networks of tiny components. Using these integrated capacitors saves space on a printed circuit board. A collection of black transistors can be found mostly on the right half of the 193x board.

Our highly skilled technicians can repair your 193X528ADG01. All of our repairs come with a 3 Year AX Control Warranty. Please contact us for additional information about our repair process. To receive the repair pricing and lead time listed above please process your repair order via our website. The following repair options may be available upon request: