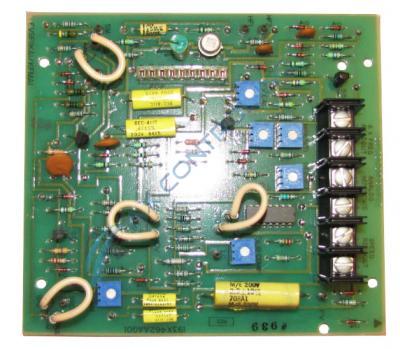 The 193X462AAG01 PCB (printed circuit board) was created by General Electric (GE). This PCB is a component of the Speedtronic 193x series by GE.

The 193X462AAG01 is a large printed circuit board which is shaped like a square. A long black terminal block is positioned on the left side of the PCB. This terminal block contains six (6) terminals which are made of silver metal. These terminals have labels which are printed on the surface of the board. These labels include 6X FREQ READOUT, ANALOG REFERENCE, and  SPEED READOUT. Several yellow capacitors (six in total) are featured on the 193X462AAG01. Three (3) of these capacitors are large while the remaining three (3) are small. One (1) capacitor which is mostly silver with one green end is situated on the left side of the 193X462AAG01. Several wires can be seen on the 193X462AAG01 which may be used to connect two components together. This board contains many small resistors. These resistors come in a variety of colors. Many of them are blue and contain bands which are red, blue, green, yellow and various other colors. Several of the resistors are green in color with bands that are orange, yellow, blue, green, and black. The remaining resistors on this 193x board are beige with bands that are red and purple. The colored bands on each resistor signify the component’s resistance capacity. This PCB has four (4) small transistors, all of which are black and shaped like half circles, positioned in various areas. A number of diodes are situated on this board. These diodes are red and black in color.

Our highly skilled technicians can repair your 193X462AAG01. All of our repairs come with a 3 Year AX Control Warranty. Please contact us for additional information about our repair process. To receive the repair pricing and lead time listed above please process your repair order via our website. The following repair options may be available upon request: