Sell Surplus: Have a OEMZL6104 to sell? Sell Now 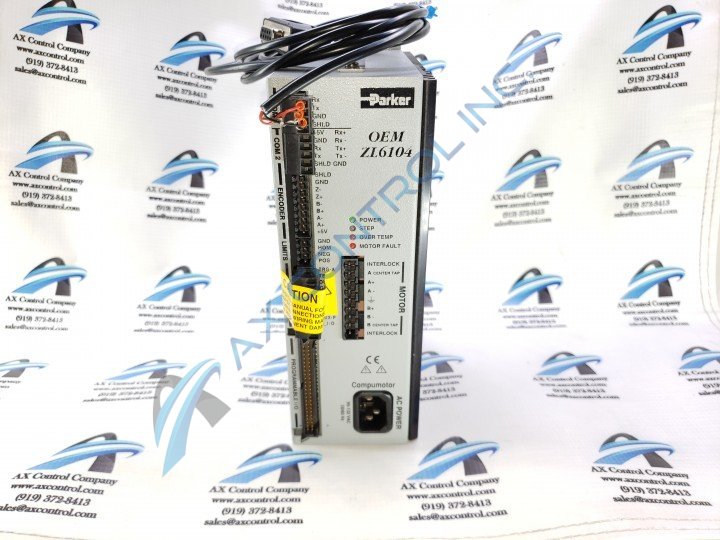 Sell Surplus: Have a OEMZL6104 to sell? Sell Now

The OEMZL6104 is a 170 Volt DC bus microstepping drive and controller that belongs to the PS Series PowerStations manufactured by CTC Parker Automation. This drive/controller is equipped with numerous I/O, language, software and Interface Capability features. These features include 16 programmable input points and 8 programmable output points in addition to an encoder channel that is configurable as either an up/down counter or hardware. Further, this unit has one RS-232C communications port and one RS-232C/485 communications port allowing it to operate alone or interface with PLCs, PCs, and thumbwheels. The OEMZL6104 has LEDs to indicate power, step, over temp and motor fault. The power LED will turn on when 120 Volts AC power is applied to the unit and the step LED will flash greed with each step pulse. Additionally, the over temp LED turns on when the maximum drive temperature limit of 131 degrees Fahrenheit or 55 degrees Celsius has been exceeded. The Motor Fault LED indicates a short circuit in the motor windlings, that the motor cable is disconnected or has shorted, or that the INTERLOCK jumper has been either disconnected or extended. The OEMZL6104 drive/controller has an AC Input rating of 95 to 132 Volts AC with a frequency of 50-60Hz with a single phase. This module is 8.85 inches (224.8mm) high, 2.93 inches (74.4mm) wide and 5.97 inches (151.6mm) deep. Never install the OEMZL6104 when power is applied to the system. Doing so may result in damage to the equipment and harm to the user.

Our highly skilled technicians can repair your OEMZL6104. All of our repairs come with a 3 Year AX Control Warranty. Please contact us for additional information about our repair process. To receive the repair pricing and lead time listed above please process your repair order via our website. The following repair options may be available upon request: