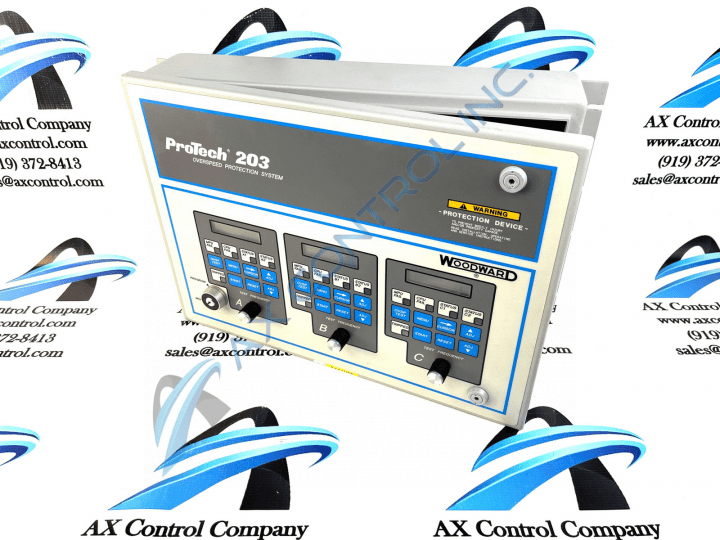 Model 9907-080 has a locked enclosure with optional stainless steel hubs. When these hubs are used, the enclosure is NEMA 4X certified. A key switch to control whether the system is in MONITOR mode or PROGRAM mode prevents unauthorized programming or testing of this ProTech 203 system.

Within this enclosure is three identical speed-sensing uses that act independently to monitor prime mover speed and perform speed calculations. Continuous monitoring is achieved using magnetic pickups (MPUs) interfaced with each unit. These units are wired in a two-out-of-three voting configuration.

The functional status of each of the three units is monitored using the corresponding operator interface, located on the front of the 9907-080 enclosure. This front panel also has six indicator LEDs. There is one LED per relay within the system. In the event one of the relays is tripped, the corresponding LED will turn on.

The relay configuration of ProTech 203 model 9907-080 allows the system to run with at least two of the three speed-sensing units online, enabling such features as testing of independent units without disrupting operations and hot replacement of any single unit.

Each 9907-080 unit can be configured so that on the sudden loss of that unit's MPU, the unit can either output both an alarm plus a trip signal, or the unit can output only an alarm. - AX Control Tech Team

Our highly skilled technicians can repair your 9907-080. All of our repairs come with a 3 Year AX Control Warranty. Please contact us for additional information about our repair process. To receive the repair pricing and lead time listed above please process your repair order via our website. The following repair options may be available upon request: