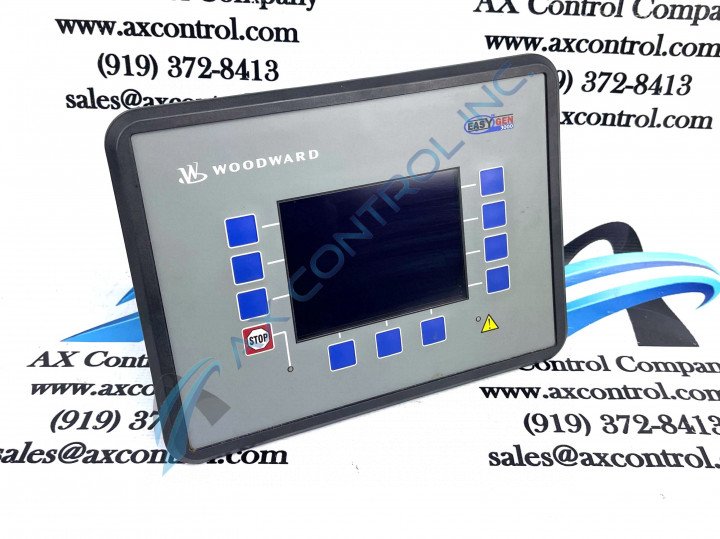 easYgen-3500XT-P2-K51 is a genset controller designed for dedicated interaction with Generator Group Controller GC3400XT (GC). Both this unit and the GC are part of the easYgen-3000 series, manufactured by Woodward. Genset controllers with the K51 option are the only controllers in the easYgen series that can work with the Group Controller. Of the K51 option models, there are two packages available. This unit is the Package 2 (P2) version.

3500XT-P2 models such as this one are Co-Gen/CHP models. They have expanded onboard inputs/outputs compared to the P1 models, and they are capable of 3-ph busbar voltage measurement. P2 models can also support an additional interface/protocol using an interface expansion card slot.

With the exception of the LDSS feature, this Woodward genset controller can be configured to operate as a standard easYgen 3500XT controller, though the Group Controller mode is set to “on” by default.

As with standard easYgen 3500 models, this unit has a color LCD and soft keys on a built-in HMI. There are some differences in screens to account for the GC interaction capability. For example, easYgen and Group Controller diagnostics are shown on different screens, and there are separate load share interfaces in the GC mode for CAN, Ethernet A, or redundant CAN/Ethernet A.

easYgen-3500XT-P2-K51 has special functions for the unit’s dedicated interaction with the GC, so all Woodward documentation for the K51 option should be reviewed before configuring and operating this controller. Woodward Manual 37900A has details on the K51 option, as well as information on additional relevant manuals.

Our highly skilled technicians can repair your EasyGen-3500XT-P2-K51. All of our repairs come with a 3 Year AX Control Warranty. Please contact us for additional information about our repair process. To receive the repair pricing and lead time listed above please process your repair order via our website. The following repair options may be available upon request: