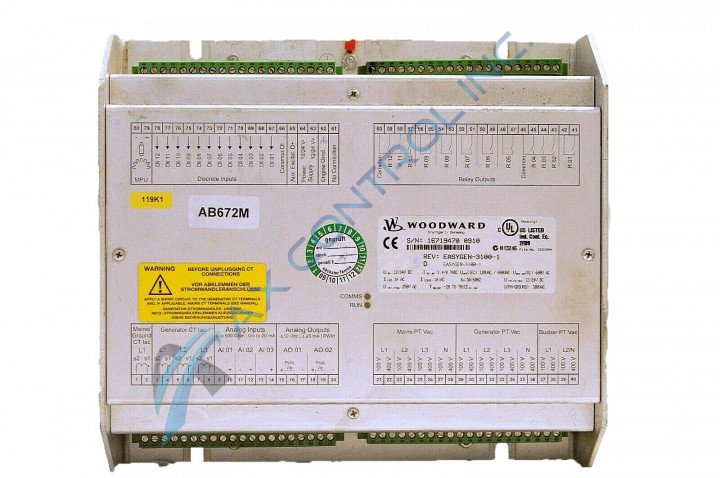 The easYgen 3000 series of devices are controller units for engine generator system management applications. The devices are largely designed to manage gas and steam turbines and compressor modules. The easYgen 3000 control units are able to be used in several applications such as: co-generation, stand by, AMF, peak shaving, import and export, or distributed generation. The easYgen 3000 series is also applicable for island, island parallel, mains parallel and multiple unit mains parallel operations. These products were all manufactured and produced originally by Woodward.

This unit in particular is listed as the easYgen-3100-1 module, and is designed with the housing frame variant that is made out of sheet metal. This model in particular is outfitted with a series of features such as the mains, generator, and busbar series of PT terminals, an analog input/output and generator CT terminal, and a CAN bus interface connector (Type #1) and  a CAN bus interface connection (Type #2). There is also a discrete input terminal, and a relay output terminal. There are a pair of interface connectors integrated into the frame of the easYgen-3100-1 module, an RS 232 and an RS 485.

This module features several standard mechanical details that includes a FlexApp software, with four application modes. There is also a DynamicsLCD display, measured at a 320 by 240 pixel resolution. There is a start/stop logic system for Diesel/Gas engines under its control. The easYgen-3100-1 module has an Engine pre-glow and/or purge control. There is also a warm up control feature via a timer or coolant temperature.

The EasyGen-3100-1 model is equipped with a variety of many different features, which include but are not limited to several different operation modes such as stop, auto, manual, and no load/load test modes. Due to the variety of operating modes this controller can control up to thirty-two gensets. - AX Control Tech Team

Our highly skilled technicians can repair your EasyGen-3100-1. All of our repairs come with a 3 Year AX Control Warranty. Please contact us for additional information about our repair process. To receive the repair pricing and lead time listed above please process your repair order via our website. The following repair options may be available upon request: