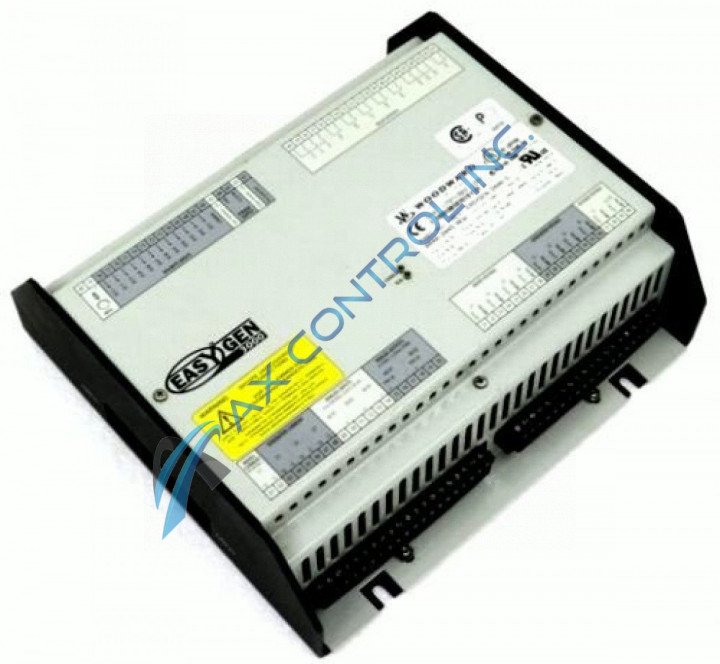 Control model 8440-2078 is produced by Woodward Inc and is from their EasyGen 3000 series and is available for purchase here at AX Control Inc. This model is alternatively called the easYgen-3400-1-P2, the P2 series is made up of plastic housing and has an LCD screen that can be used for manual operation. The P2 series of models are equipped with more interfaces and connectors than the P1 series, the P2 series has a combination of thirteen interfaces which are terminals, connectors, and inputs/outputs.

The P2 series modules have different analog inputs and for peak accuracy, two-pole analogs should be used, there are nine setpoints that can be used to freely configure for type definition of the controller, these inputs should be connected to terminals eighty-three through ninety-one. The P2 series of controllers also have transistor outputs that can be used to drive counter pulses such as kWh or kvarh.

The 8440-2078 model is equipped with configurable alarms and tests to better ensure that your controller runs as smoothly as possible. One of the many features of this model is the cylinder temperature monitoring system that is typically used with in-line and V engines. The PID control on your device is used to help configure water level, fuel level, pressure/other process values, and heating circuit control.

Our highly skilled technicians can repair your 8440-2078. All of our repairs come with a 3 Year AX Control Warranty. Please contact us for additional information about our repair process. To receive the repair pricing and lead time listed above please process your repair order via our website. The following repair options may be available upon request: