Model 8280-1076 from Woodward Series 723PLUS of Digital Controllers (Ctrl Assm 9906-619). This is a programmable unit for applications requiring two magnetic pickups or proximity switches. It can be used in load-sharing systems as it contains supported circuitry and connections. 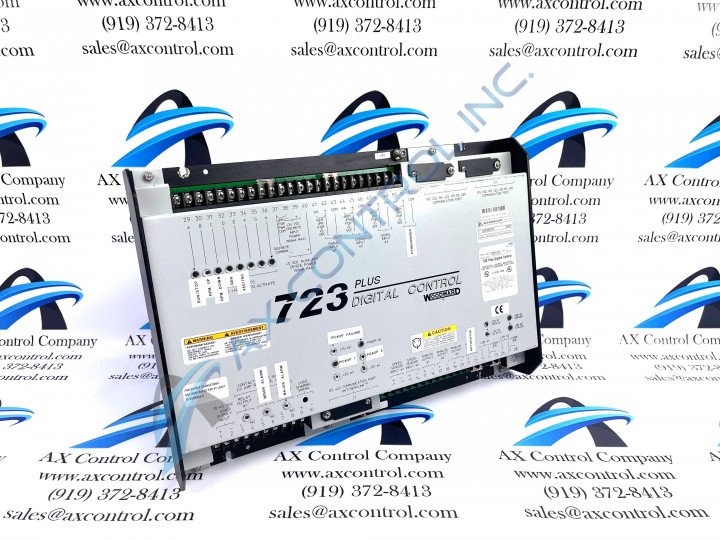 Model 8280-1076 from Woodward Series 723PLUS of Digital Controllers (Ctrl Assm 9906-619). This is a programmable unit for applications requiring two magnetic pickups or proximity switches. It can be used in load-sharing systems as it contains supported circuitry and connections.

This unit is a load-sharing control/Cat ADEM in the 723PLUS series by Woodward. There are three part numbers associated with this control. This part number, 8280-1076, refers to the system; the hardware is part number 9906-619; the application software is part number 5601-1088. This unit has four operation modes: Load Sharing, Synchronization, Stopped / Bypassed, and Speed-Reference Forward.

Speed synchronization and load sharing control are the two primary functions of the Woodward 723PLUS Load Sharing Control/Cat ADEM. For this purpose, the 8280-1076 control has two-speed sensor inputs which may be either passive (MPUs) or active (proximity switches).

Along with the two-speed sensor inputs, the Woodward 8280-1076 control has four analog inputs, three analog outputs, three discrete outputs, and eight discrete inputs. All of the I/Os on the 723PLUS controls have several defined signals and are configurable to suit the needs of various applications. There are eleven discrete signals that can be assigned to any of the three discrete outputs and/or four LEDs on this unit. Two of these signals are minor/major alarms.

Three serial ports on the 723PLUS 8280-1076 control support the unit’s communication options. This includes the use of Woodward’s Hand Held Programmer (part number 9907-205), Watch Window, ServLink, and Modbus.

Details on the 8280-1076 control, including additional relevant documentation, can be found in 723PLUS Load Sharing Control/Cat ADEM Manual 26373 and 723PLUS Hardware Manual 02877.

Our highly skilled technicians can repair your 8280-1076. All of our repairs come with a 3 Year AX Control Warranty. Please contact us for additional information about our repair process. To receive the repair pricing and lead time listed above please process your repair order via our website. The following repair options may be available upon request: