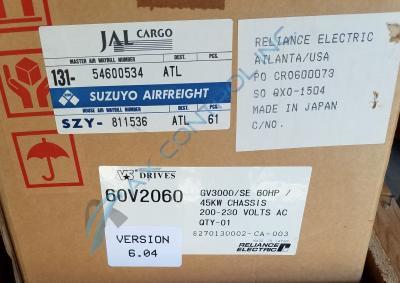 The 60v2060 is a Reliance Electric 60 HP GV3000 AC Vector-Duty Drive. This drive may have been mass-produced by ABB and/or Baldor Reliance during its production years but is now discontinued by Reliance. Although it may now be hard to find, AX Control still attempts to keep the 60v2060 in stock.

The 60v2060 is in a chassis type enclosure. This drive should be installed in a location that is free of airborne contaminants, coolants, and oil. It should also be in a cool and dry place that is between 0 to +55 degrees Celsius. On the faceplate of the enclosure are several features. There is a red PWR lamp, an RS-232 female port that is attached to the regulator card, and a user interface. The user interface is a keypad and LED display. Some of the important internal components of the 60v2060 are a regulator board, a PISC-40 base board, a DC Bus capacitor, a keypad with a bracket, an IGBT module, a diode bridge, a DC Bus fuse, and three fan assemblies including an IGBT module fan and a diode module fan.

What are the maximum input and output amps for 60v2060?

Our highly skilled technicians can repair your 60v2060. All of our repairs come with a 3 Year AX Control Warranty. Please contact us for additional information about our repair process. To receive the repair pricing and lead time listed above please process your repair order via our website. The following repair options may be available upon request: