The GE Mark VIe IS420UCPAH2A functions as a high speed controller and features an additional expansion I/O board.

Sell Surplus: Have a IS420UCPAH2A to sell? Sell Now 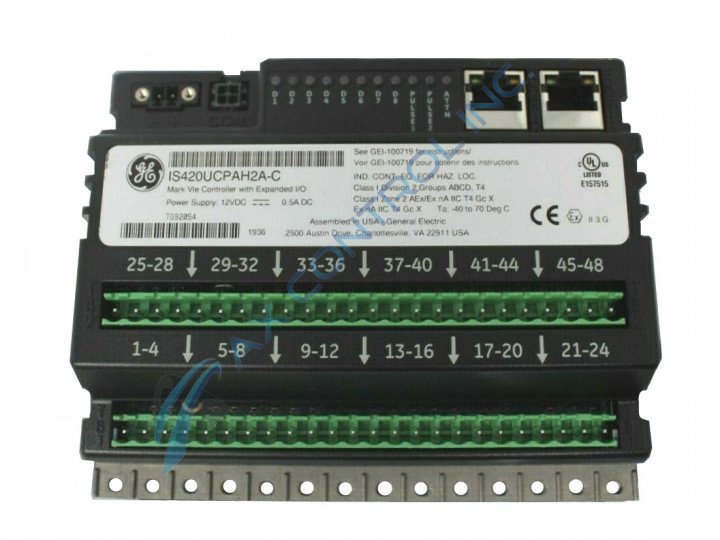 The GE Mark VIe IS420UCPAH2A functions as a high speed controller and features an additional expansion I/O board.

Sell Surplus: Have a IS420UCPAH2A to sell? Sell Now

The IS420UCPAH2A is a controller module designed by General Electric as part of their Speedtronic Mark VIe system for the management of industrial gas, steam, or hydro-electric turbine systems.  The Mark VIe was one of the last of the Speedtronic systems to be released by GE.

The IS420UCPAH2A is one of two UCPA controllers available for the Mark VIe system.  These controllers both include a BPPC processor board and an STWC base I/O board.  The IS420UCPAH2A also includes a WEXP expansion I/O board.  This board adds six analog inputs to the two already available through the STWC board.  It also adds two analog outputs and four discrete I/Os (for a total of 8 in the system.)  Some of these I/O points are configurable on a per point basis.  I/O configuration is typically done using the ToolboxST Component Editor via the Hardware tab.

The IS420UCPAH2A is built using a 332 MHz Freescale 3308 processor with 64 MB of RAM and 256 MB of onboard flash memory.  The controller uses a QNX operating system.   This unit is typically base mounted.

Additional information about the IS420UCPAH2A, including detailed information about power consumption, operating voltage, and ambient temperature ratings, can be found through GE publications like GEH-6721 Vol II for the Mark VIe and Mark VIeS systems.

AX Control fulfills and ships orders throughout our workday.  If you place an order for an in-stock product before 3 pm, Monday through Friday, we can typically get it pulled, processed and on its way to you before the end of the day.

Our highly skilled technicians can repair your IS420UCPAH2A. All of our repairs come with a 3 Year AX Control Warranty. Please contact us for additional information about our repair process. To receive the repair pricing and lead time listed above please process your repair order via our website. The following repair options may be available upon request: